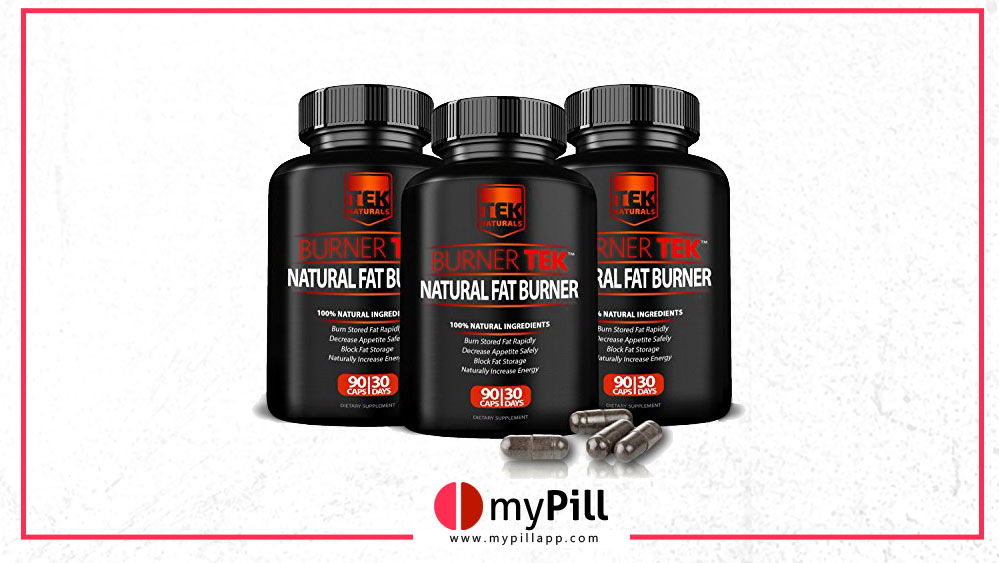 BurnerTEK Review: Does It Really Work?

There is a lot of hype surrounding fat burners in the market.

Shedding off some fat has become perhaps the most common target among men and women today.

However, it is difficult to choose the best fat burner that works.

Could BurnerTEK be the solution to this challenge?

Well, it claims to:

It is suitable for both men and women who want to burn fat and enhance tone1 .

We carried out in-depth research to find out about this product.

Here is what we found in our BurnerTEK review below.

BurnerTEK is a fat burning supplement that uses 12 all-natural ingredients to burn fat in 3 processes:

It is made by Tek Naturals, a sports nutrition company based in the USA.

The manufacturer states that it is designed to burn the most troublesome fat deposits in the body, including belly fat.

BurnerTEK has a combination of 12 ingredients.

Green tea extract2 has catechins and caffeine which are scientifically backed to aid in fat loss, and improve heart health and blood circulation.

While catechins have antioxidants that speed up the burning process, caffeine inhibits appetite and increases energy.

It enhances fat loss if consumed up to 400 mg in a day.

BurnerTEK contains 500 mg of this ingredient in a single dose.

This is a polysaccharide fiber that plays two roles in the fat burning process.

More than 14 studies have reported evidence that it reduces cholesterol and reduces cravings by making an individual feel fuller.

Cayenne pepper4 is popularly known as a potent thermogenic.

It contains capsaicin that burns calories while increasing metabolism.

Moreover, it helps to suppress appetite naturally. Thus, the body burns fat consumed without storing it.

BurnerTEK has 100 mg of this component.

Caffeine5 increases metabolism by 10 percent which aids in burning fat even when resting.

Garcinia Cambogia6 has Hycroxycitric Acid that blocks the storage of fat in the body and prevents the development of new fat cells.

This component aids in the process of taking fat into mitochondria to be transformed into energy.

Green Coffee Bean Extract8 has chlorogenic acid that reduces calories in carbs and hinders the assimilation of glucose in the blood.

In a study by the University of Scranton in Pennsylvania, participants who took this component lost 17 pounds.

Others studies have proved that it is significant in burning belly and midriff fat.

There is 150mg in each BurnerTEK pill.

It contains curcumin that beats insulin resistance in blood.

Chromium Picolinate10 is a common ingredient in sports nutrition products.

It is essential in burning fat through inhibiting triglycerides and cholesterol.

Moreover, it protects the heart against health risks and regulates glucose.

BurnerTEK has 100mg of Chromium Picolinate.

They help the body to change fat, carbohydrates, and sugar into energy.

Additionally, they play a major role in the defense system, mood, and appetite.

Through its rich combination of ingredients, BurnerTEK focuses on reconditioning the way the body burns existing and potential fat.

Secondly, it tunes the body to hinder its storage in the future.

Eventually, it inhibits appetite to avoid overeating hence preventing its potential buildup in individuals who are overweight.

Through the process of thermogenesis, this product eliminates toxins and aids weight loss as well as increasing metabolism to burn fat faster.

The manufacturer recommends that it should be combined with an active workout regime for 3 to 6 months to realize results.

A single dose consists of 3 capsules.

It should best be taken in the morning or slightly before exercising.

The pills can be taken at once after breakfast or at different times in the day.

However, avoid taking it before bedtime, because caffeine may disrupt sleep.

Tek Naturals claim that it does not have any side effects.

However, some of its ingredients may pose some health risks.

BurnerTEK has received 21 customer reviews on Amazon, with 38 percent giving it an overall rating of 2.8 stars out of 5 stars.

It has received both favorable and unfavorable reviews.

Let’s start with the negative ones.

What a F’ing JOKE!!!!! This stuff is GARBAGE! Might as well put baking soda in capsules and sell it for $64.99! Absolutely robbery charging any kind of money for this stuff that doesn’t work at all!

I’ve used several products in the same category over the years. Some better then others. But this Burner Tek is seriously LAUGHABLE. Took two the first day in one shot, NOTHING. Not even a slight bit of boost or energy. Took THREE today and might have felt the slightest bit of something late afternoon, but on second thought, it was probably just the sun outside while working! GARBAGE!!!!

Maybe these guys are hoping for a placebo affect, but this stuff does nothing. I added BurnerTek to an already successful weight loss program to add some bump to the progress. Not only did my weight loss not get that bump, it came to a screeching halt.

The same diet and exercise routine suddenly stopped working for the 2.5 weeks I was taking BurnerTek. And as soon as I stopped taking the pills, the weight loss restarted within a couple of days.

I have no scientific proof to offer, only my experience. What it a weight loss plateau? Maybe, but one might hope that BurnerTek might help prevent those and minimally keep some loss occurring admits a working program… But I am guessing all anyone really cares about is their own experience with a product and not the reviews.

I can say that with some other weight loss supplements, I could at least “feel” some affect. BurnerTek just did nothing. And with the cost, I need to see some positive effects.

This fat burner is the real deal. If you are searching for other options, don’t skip over this one. With just using 1 bottle over the period of a month, I lost about 15 pounds of fat. This was mostly in stubborn places such as the love handles and lower back fat. If you want to put in some work and need that extra kick to shed some pounds, I would suggest Burner Tek. I have tried other thermogenic activators in the past, but none worked as fast and efficiently as this did.

BurnerTEK: Packages, Prices & Where To Buy It

They offer free shipping in the United States.

Shipping to all other countries is charged $25.

The product comes with a 30-day money back guarantee, but only after the unused product is returned.

It is free from banned components, which means it is not likely to pose any health risks to the user.

Nevertheless, some people may be sensitive to some of its ingredients.

This product aids in burning fat but you should put more effort into working out and eating healthy to achieve your desired look.

We laid out the facts, will you buy BurnerTEK? Comment below and tell us what you think!