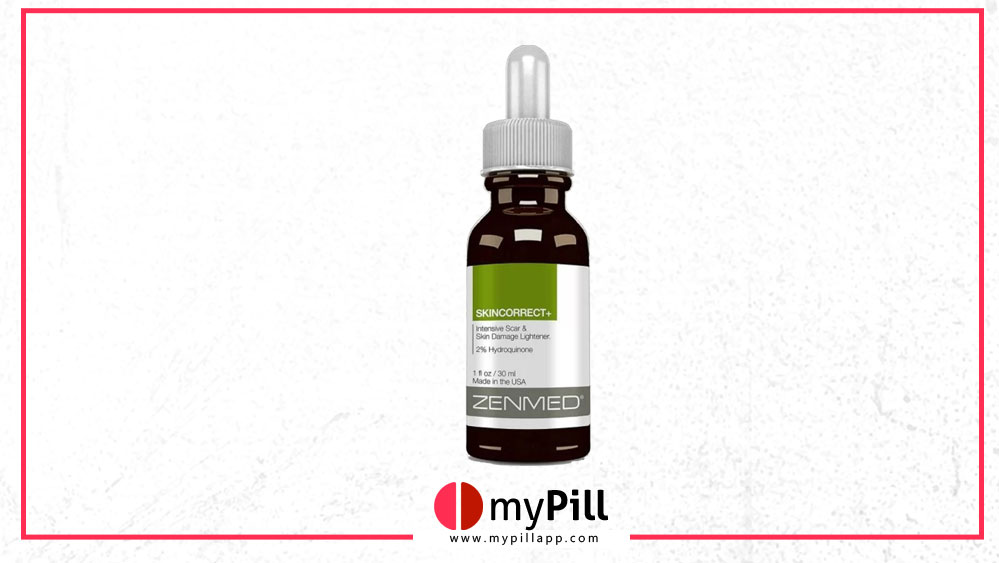 Zenmed’s Skincorrect+ is a skin lightening product that promises to lighten scars and help get rid of hyperpigmentation issues, especially those caused by acne.

Your face is the most visible part of your body.

It is the first thing people see when they look at you.

Many people with dark spots or hyperpigmentation1 feel less confident than they should.

Skincorrect serum by Zenmed claims to offer a solution.

They promise to lighten scars and help get rid of hyperpigmentation issues, especially those caused by acne.

We examined their claims to determine their accuracy.

See below for our findings.

Skincorrect+ intensive scar and skin damage lightener is a lightweight serum with a blend of naturally-derived ingredients.

It is manufactured by a company called Zenmed, created in 1999 and located in the USA.

The main active ingredient in Skincorrect+ is hydroquinone.

Hydroquinone2 is an aromatic organic compound also known as 1,4 – benzenediol.

It is found naturally in some types of plants.

Hydroquinone is a well-known skin lightener.

It works by inhibiting the production of the enzyme tyrosinase.

This enzyme is needed in order to produce melanin.

Melanin is the pigment responsible for skin color.

A 2% concentration is the highest permissible amount for this ingredient without a prescription.

However, 4% is a much more clinically effective dose.

Because hydroquinone inhibits melanin production, it only works with continual application.

If you stop using it, melanin production will resume.

Glycolic acid3 is a type of alpha hydroxy acid (AHA) that is derived from dietary sources.

It is the smallest and most active of the AHAs.

Glycolic acid is an exfoliant that works by loosening the glue-like material that holds dead skin cells on the skin’s top layer.

It has also been found to promote the production of collagen and elastin.

These features increase cell turnover in the skin, getting rid of pigmented cells that are then replaced with new cells.

Phytic Acid4 is a naturally occurring ingredient in plant seeds.

It works as both an antioxidant and a skin lightener.

As an antioxidant, it works to protect the skin from free radical damage.

As a skin lightener, it works by blocking iron and copper in the formation of melanin.

It is used in the treatment of hyperpigmentation and melasma and has been found to be at least as effective as hydroquinone.

Like hydroquinone, it inhibits tyrosinase, the enzyme needed for melanin production.

The cells responsible for producing melanin.

Its performance is boosted by the presence of alpha hydroxy acids.

Willow bark extract acts as an exfoliant and has skin-soothing properties.

Mulberries are rich in vitamins and minerals which nourish the skin.

They increase skin hydration and suppleness.

They also act as a skin lightener by regulating the synthesis of melanin.

An anti-inflammatory that tightens, tones and soothes skin.

Also known as Gotu kola7, is known to reduce hyperpigmentation.

It also boosts collagen production and prevents the breakdown of elastin and hyaluronic acid.

This maintains the skin’s moisture and elasticity.

Some amino acids, when combined, are thought to have a lessening effect on hyperpigmentation and work together to brighten the skin.

Melanocytes are cells that produce melanin, the substance responsible for pigmentation in the skin.

These cells are located in the bottom layer of the epidermis.

Melanocytes are activated by ultraviolet exposure from the sun, acne, pregnancy, trauma or the aging process.

Skincorrect+ works by using ingredients that:

The product is applied in a simple 2-step process.

After cleansing the face, apply the serum to the affected areas.

Allow the serum to dry completely and then apply Zenmed moisturizer.

The serum should only be applied at night and sunscreen should be used during the day.

Hydroquinone has potential side effects if not used correctly.

It is strongly recommended that hydroquinone be used no more than 4 months at a time and then alternated with other skin brighteners.

More prolonged use has been associated with a condition called ochronosis or darkening of the skin.

This association has been observed particularly in darker skinned individuals.

Hydroquinone should also not be used in combination with products containing peroxides as the combination tends to stain the skin.

It should also not be combined with anything containing resorcinol as the combination has been found in association with ochronosis in darker complexions.

Avoid getting the product in your eyes as it may cause pigmentation and damage the cornea.

Other possible side effects include:

The most common side effects:

Skincorrect+ has been available on the market for several years.

The ingredients in the product are well-researched and known for their effectiveness.

There is no major litigation pending involving the product and customers seem generally satisfied.

There is no indication that this is a scam.

There are several reviews for this product on the official website.

Here are some samples that may be helpful.

Some customers were very satisfied.

I am astonished at the results of this product and could see the over all evening out of my skin in as little as 4 days starting to happen! It has been around two and a half weeks now all my blemish marks are gone and they had been there for a long time the age spot on my cheek bone is starting to fade also to my amazement!

I LOVE LOVE LOVE this and I will be repurchasing when my bottles run out! Just like all my other ZENMED products this delivers results..I was just amazed at how quickly! Thank you once again ZENMED..I’m looking better everyday thanks to you guys!

I’ve been using this product for a couple of months and still haven’t seen the total affect of it. Even though my skin looks better but my trouble spots (which are my laugh lines and darkness under my lips). By now I thought that everything would have cleared up.

A few customers saw no results.

I have been using it for two weeks now and haven’t seen much of a difference.

Zenmed Skincorrect+: Packages, Prices & Where To Buy It

We recommend buying this product at the official company website www.zenmed.com

Check packages and prices below.

Flat Rate Shipping on all US orders $6.95

They do not offer a subscription option.

The company offers what they refer to as “The Zenmed 60 day People Pleaser Guarantee.”

At ZENMED, we create products with a conscience and we are proud to stand behind them 100%. If for any reason you are not completely satisfied with your purchase, we back it up with a 60 day money back guarantee.

Any item may be returned for a full refund within 60 days of shipment.

They do suggest contacting their customer service first for help or alternative suggestions but this is not mandatory.

They also provide a contact email for easy communication.

Zenmed’s Skincorrect+ is a well-formulated product that targets hyperpigmentation issues.

The product contains an impressive range of ingredients known to be effective in fighting hyperpigmentation.

Although one concern may be the amount of the main active ingredient, hydroquinone.

The formula only contains 2% while the most effective clinical concentration is 4%.

Hydroquinone also has a reputation for several possible negative side effects and should be used with care.

Overall, this product may be an effective choice for those with mild to moderate hyperpigmentation.

Those with severe hyperpigmentation, budget constraints, or sensitive skin that is prone to react or flare up may want to consider another product.

We laid out the facts, will you buy Zenmed Skincorrect+? Comment below and tell us what you think!

0 Replies to Zenmed Skincorrect+ Review: Does It Really Work?