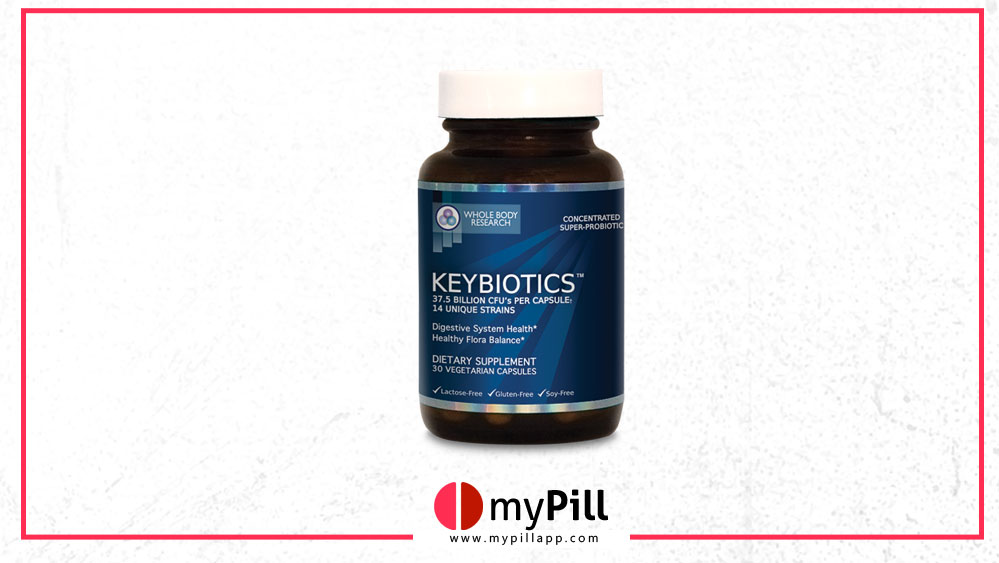 Whole Body Keybiotic is a probiotic supplement claims to be one of the strongest and most effective probiotics available on the market.

Taking care of yourself is a day to day responsibility.

Eating a nutritious diet, exercising and taking time to relax are all imperative to our overall health and wellbeing.

But no-one is perfect.

Everyone of us has gone through times where we are subsiding more on junk foods than a balanced plate of veggies.

The trouble is, this lifestyle can wreak havoc on the balance of bacteria in your gut, leading to a plethora of health problems.

One of the best ways to heal this damage is by taking a probiotic supplement such as Whole Body Keybiotic.

This 100 percent natural probiotic supplement claims to be one of the strongest and most effective probiotics available on the market.

So let’s take a closer look and find out if it really is as good as it says.

What is Whole Body Keybiotic?

Whole Body Keybiotic is a probiotic supplement manufactured by Whole Body Research LLC – a health supplement and vitamin company based in Chatsworth, CA.

Whole Body Research LLC has a Better Business Bureau rating of A+ and was founded by Dominic Galvin in 2012.

Their company mantra is “the body is meant to be healthy and whole.”

This is because it contains a very strong concentration of “colony forming units” or “CFU’s” – 37.5 billion to be exact.

Essentially, a CFU is a kind of bacteria that has the potential to colonize the gut, by living and reproducing itself into a much larger community.

The term is only used to describe living and active organisms, discounting those that are inactive and will have no benefit.

Most people know that good gut bacteria can benefit your health, but it is the type of bacteria that determines what improvements you may experience.

So, let’s have a look at what sort of probiotics are used in Whole Body Keybiotic.

There are 14 different types of probiotic bacteria included in Whole Body Keybiotic.

We look at the most well known below.

Lactobacillus is perhaps the most widely recognized bacteria found in probiotics.

They are commonly found inhabiting oral, vaginal and digestive localities in humans.

True to its name, lactobacillus works to produce lactic acid.

It achieves this by using the enzyme “lactase” to break down the sugar “lactose” into lactic acid.

Lactobacillus is the biggest family, or genus, of lactic acid forming bacteria – comprising of more than 50 different species.

This type of bacteria can help to fight against lactose intolerance, as well as battle harmful bacteria such as e-coli and salmonella.

Bifidobacteria are the most common microorganisms found within our intestines.

However, as we get older, the quantity of bifidobacteria significantly reduces.

This kind of microorganism can combat irritable bowel syndrome, fight off pathogenic infections and stop diarrhea.

If you suffer from inadequate levels of bifidobacteria, you are more susceptible to serious health conditions such as diabetes, obesity and various allergies.

Streptococcus thermophilus (S. thermophilus) is a type of bacteria frequently used during the manufacture of some dairy products.

In human babies, this microorganism is the first to colonize the gastrointestinal (G.I) tract and some believe that it plays a significant role in the development of intestinal cells.

One of the less common probiotics; S.thermophilus has great benefits for the health of our skin, blood and digestive tract.

How Does Whole Body Keybiotic Work?

The biggest challenge many of us face on a day to day basis is enduring we are eating healthily.

We all know we should consume a varied, wholesome and preferably organic diet – but in the modern age it can feel difficult to avoid processed foods or preservatives.

Refined sugars are really bad for the health of our digestive tract, which if thrown off balance, can damage the health of the rest of the body.

A prime example of this is candida.

This is a form of yeast bacteria, which flourishes on a diet of simple, processed sugars and sweeteners.

When candida levels multiply out of control, they start to destroy the intestinal wall and allow toxins to leak into the bloodstream.

Unsurprisingly, this results in a range of health issues of varying severity; from food sensitivities and headaches to anxiety, IBS and arthritis.

Probiotic bacteria replenish a healthy microbial balance in the gut.

The more good bacteria that are present, the less damaging bacteria can thrive.

Whole Body Keybiotics are specifically designed to survive the acids of the stomach and digestive system, colonize the G.I tract, balance the gut, calm inflammation and reduce damaging bacteria such as candida to safe levels.

The suggested dosage of Whole Body Keybiotics is to take one capsule prior to every meal.

Whole Body Keybiotics say that most people will feel a benefit from the very first time they use the product, but it can take from between 3-4 weeks to restore gut balance fully.

This supplement is free of gluten, lactose and synthetic fillers.

If your gut is out of balance, you will certainly benefit from using a probiotic.

Whole Body Keybiotics say that their formula is of the highest quality and will not cause any side effects.

However, we came across a few reports of the following side effects.

There has been a number of complaints regarding the effectiveness of Whole Body Keybiotic.

But we couldn’t find any evidence of lawsuits or major complaints against the product.

There are many reviews online for this product.

Whole Body Keybiotic has a total of 630 customer reviews on Amazon, with 80 percent of these being rated 5-star.

Some customers said that Whole Body Keybiotic helped to curb their sugar cravings and gave them more healthy energy.

The only quality probiotic that i could find that doesn’t need to be refrigerated.
I don’t have stomach problems anymore as long as I take this little pill everyday and I have not been sick since I started taking it which has been over 2 years now. I don’t have sugar cravings and I don’t overeat anymore. Smaller portions satisfy me. I do already tend to eat healthy most of the time, but even when I do, this probiotic allows me to not regret it. This is something that I will be taking for life…

I noticed a difference in two weeks. My taste buds changed and I had NO…I repeat NO sugar cravings. I could not believe it as I have been addicted to sugar for a long time and it basically took over my life. I was skeptical at first and thought it to be a placibo effect but so far after taking this for a month I am proud to announce that I still have NO SUGAR CRAVINGS!!!

I still try to eat chocolate but find out that it has no taste for me. I don’t know if this is part of the side effect of this product or what but it is really helping me a lot with my junk food habits.and I find myself craving fresh fruits and healthy diet than anything that is bad. Slowly my body is also getting in shape. My once bloated stomach is now barely noticeable and I see my waist that I thought I lost for good. I am very happy with this product and I have ordered more…

Other customers were skeptical about the effectiveness.

I have been taking this daily one a day for I believe a few weeks now and at first it seemed to help me a lot but I am not really sure anymore, today I doubled up my dose so i guess i will see if it makes a difference.

UPDATE: I finished the bottle and to be perfectly honest the store brands work just as well or better

I may have been expecting miracles when I ordered this. I had been using two yogurts a day to keep me regular and it was working great. I thought I would try a probiotic supplement and compare it to yogurt. By using the probiotic supplement I found that I was only having a bowel movement every other day. The price of this product does not meet the results.

Whole Body Keybiotic: Packages, Prices & Where To Buy It

Whole Body Keybiotic is available to purchase from their official website directly.

The product is also available on Amazon, but due to the perishability we would recommend you buy from the official website.

Each bottle contains a 30 day supply.

If you are not satisfied for any reason, you can call them within 90 days of receipt and receive a full refund.

Sometimes, years of a bad lifestyle can catch up with us.

If you have not been taking care of yourself as well as you should, or are suffering with an illness related to the gut – Whole Body Keybiotic could be a good choice for you.

Whole Body Keybiotic has many positive reviews that vastly outweigh the negative ones.

This gives us even more reason to believe that it is a quality probiotic that truly does what it claims.

Of course, this product will not replace the need to eat well and lead a healthy lifestyle, but it may help you to repair some of the damage done and restore the balance required for you to feel good.

We laid out the facts, will you buy the Whole Body Keybiotic? Comment below and tell us what you think!