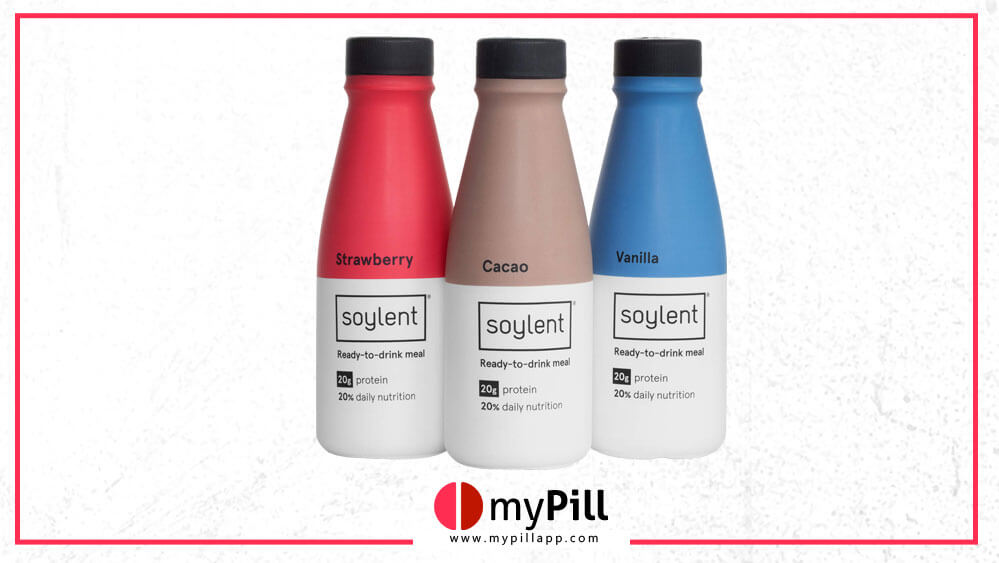 MyPill > Weight Loss > Soylent Review: Should You Buy It?

Soylent Review: Should You Buy It?

Soylent is a meal replacement drink that provides 20 percent of your daily nutritional needs per serving. Does it really work? Read our review!

Contents show
What Is Soylent?
Ingredients
How Does Soylent Work?
How To Use It?
Are There Any Side Effects?
Is Soylent A Scam?
Soylent Reviews: What People Say About This Product?
Soylent: Packages, Pricing and Where to Buy
Money-Back Guarantee and Refund Policy
Pros and Cons
Soylent Review: Should You Buy It?

Protein shakes, and other meal replacement supplements have been steadily getting more popular for the past 5 years.

These numbers come as no surprise, seeing as consumers are becoming more nutrition savvy, opening up to the fact that full meals are not all it takes to maintain a healthy body and may, in fact, be among the leading causes of obesity.

Not to mention, the ongoing corona pandemic has taught people to go for shelf-stable food items – like nutritional supplements, meat alternatives, and powdered milk.

Soylent is one of such non-perishable food substitutes containing protein, fibre, and other essential nutrients.

Is it worth it? We take a closer look.

Soylent is a range of food substitutes whose manufacturer claims to be a healthy meal alternative that’s also good for the planet.

They promise the basic nutritional value you would get from conventional meals while leaving out the bad stuff.

The drinks also feature a café category, in which you get to choose between café mocha, café chai, and café vanilla.

The last of their ready to drink variety is called “stacked” and is said to be a complete nootropics drink for increasing focus and attention.

Soylent powder is intended to allow you to create your recipes – like making a smoothie.

It comes in the original (no flavour) and cacao flavours.

The third and last members of the Soylent range of meal alternatives, soylent bars, are snacks that are equally packed with protein, fibre, and other essential nutrients as the others on the list.

Part of the company’s appeal is making the world a better place by using recyclable containers, trying to leave a smaller carbon footprint, and donating to the needy around the world. 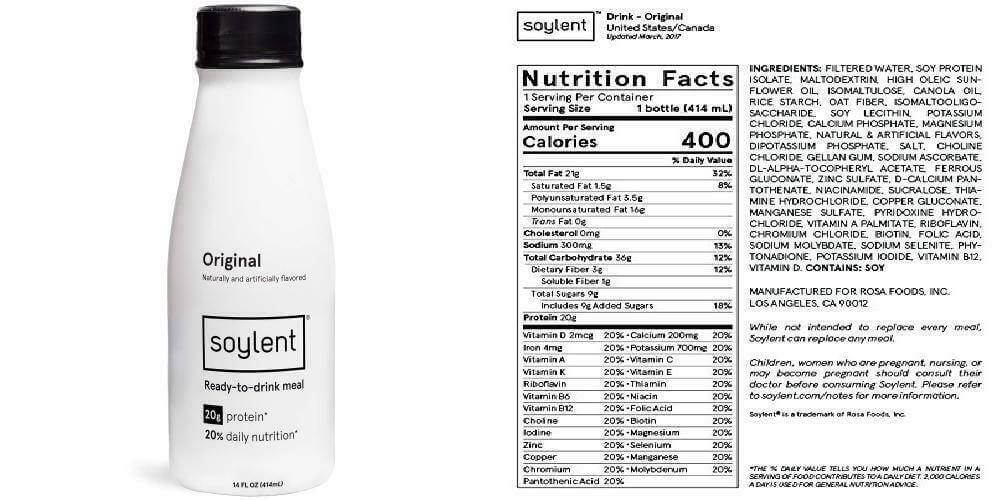 Soy Protein
Soy offers a wide range of plant-based proteins and has won the hearts of many exercisers, healthy eaters, and health experts. The most common controversy surrounding soy protein isolate, however, is that the plant also contains phytoestrogens that behave the same as oestrogen in your body, which may cause an oversupply of the hormone after long-term use.
High-Oleic Sunflower Oil
The oleic acid in this oil is considered a healthy monosaturated fatty acid that is linked to a healthier heart as compared to saturated fats and trans fats. However, soylent powder does not contain this sunflower oil.
Canola Oil
Canola makes for a good source of monounsaturated fatty acids. It is believed to be better for your cardiovascular system as well as weight management.
Maltodextrin
Often used to make food products thicker and creamier, maltodextrin is obtained from starchy foods such as potato, wheat, rice, or corn. It has a relatively high glycemic index, though.
Isomaltulose
Labelled as beet sugar, Isomaltulose is believed to beat normal sugar because of its slow digestion that may help stabilize blood sugar levels.
Other ingredients
Tricalcium phosphate, Natural and artificial flavours, Cellulose, Potassium chloride, Manganese sulfate, Vitamins, Potassium iodide, Choline chloride, Copper gluconate, Chromium chloride, Zinc oxide

How Does Soylent Work? 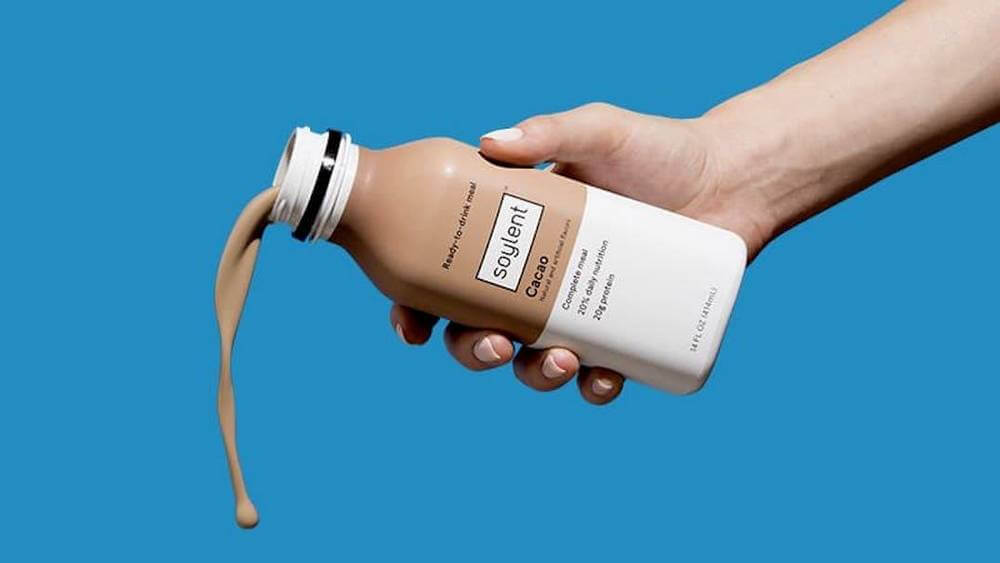 Rather than having a full meal, you could take any of soylent’s products and get a basic nutritional value, complete with fibres, fats, proteins, omega-3s, and other micronutrients such as potassium and choline.

Soylent’s core ingredient, the protein, is purposefully extracted from soybeans, which the company claims to be more suitable than other plant-based protein sources because it contains all the essential amino acids.

These products also have higher fat contents than most in the same category (47% of the total calories).

While this may seem illogical, soylent claims to use the correct fats in the right way, providing satiety as well as a perfect balance of essential fatty acids such as omega 3, 6, and 9. 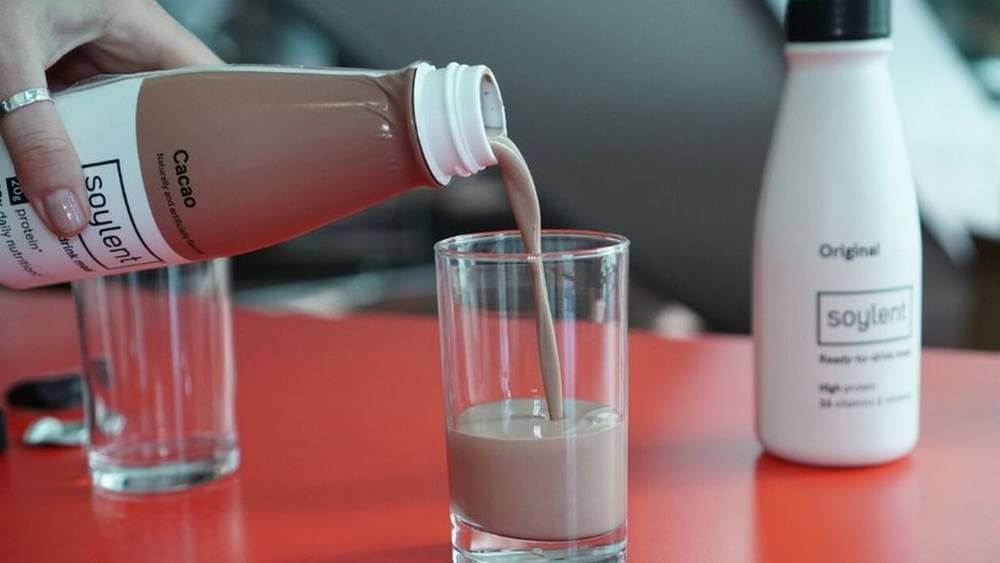 Use Soylent to replace a conventional meal (nutritionally) or stay full between meals without having to go for unhealthy snacks and fast foods.

The drinks only involve shaking, twisting, and filling your belly. These are great for on-the-go nutrition.

You may use soylent café or stacked when you wish to get a boost on your focus and attention as well as energy levels.

Stacked is especially convenient for those who want to go for something that offers nootropics benefits.

Soylent bars are great for snacking between meals and may also be used to replace a full meal, especially when you want to maintain a low-calorie intake.

Use soylent powder to create your drinks and favourite smoothies with your desired ingredients and volume.

Are There Any Side Effects? 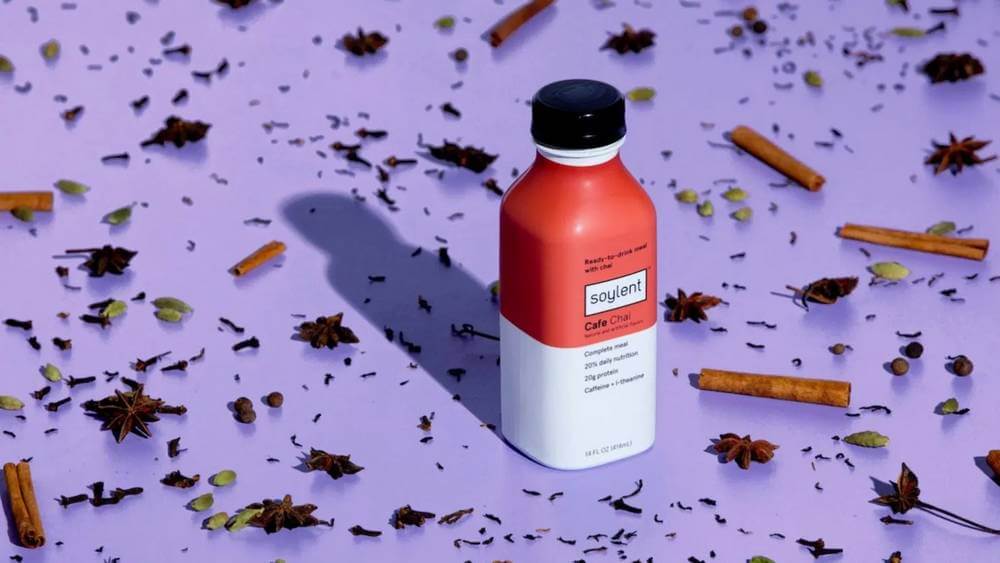 Soylent products are generally tolerable and considered safe, although some reported and expected side effects might include:

One person reported “diarrhoea and nausea whenever they drank alcohol or ate other foods”.

However, this may be attributed to their stomach getting accustomed to working on the easily digestible Soylent products and having a hard time adjusting to heavy foods and drinks.

Is Soylent A Scam? 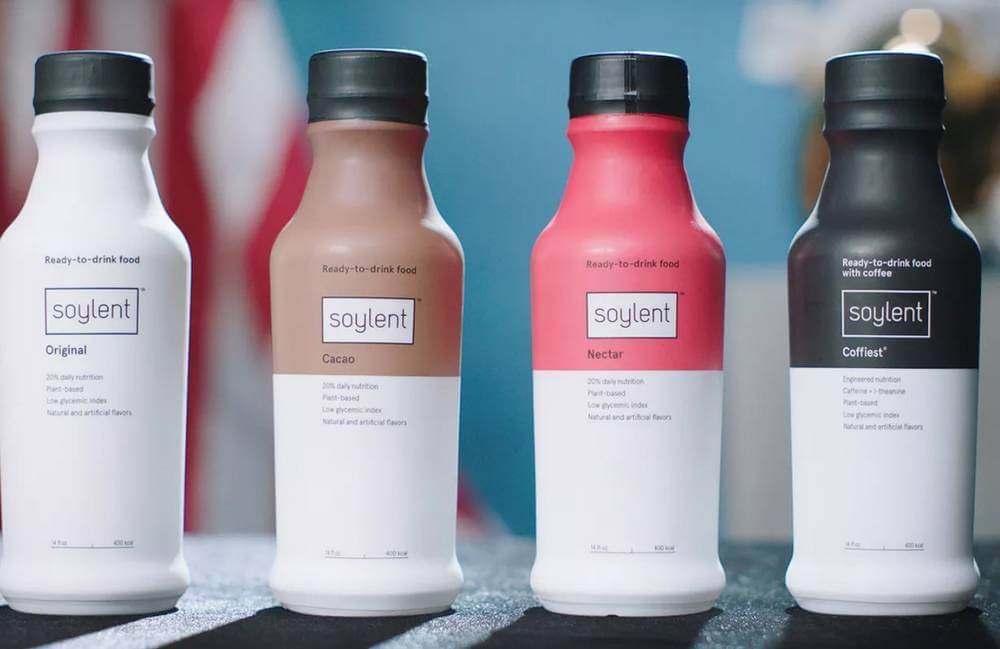 Soylent products do not appear to be a scam unless marketed as weight loss supplements, which is not the case.

However, this is not the first time we see a product marketed under the name soylent.

In 2016, we had Soylent 250-calorie food bars, but their distribution had to be discontinued after many people fell ill following their consumption.

In some cases, it was so bad the victims had to seek medical attention.

The company asked people to dispose of any bars they still had.

They also issued a statement 2 saying the food poisoning had affected less than 0.03% of total bars sold and that microbial tests had come out clean, meaning the reported side effects might have resulted from sensitivity or allergic reactions to ingredients.

However, none of Soylent’s current products have received such feedback from consumers.

Soylent Reviews: What People Say About This Product? 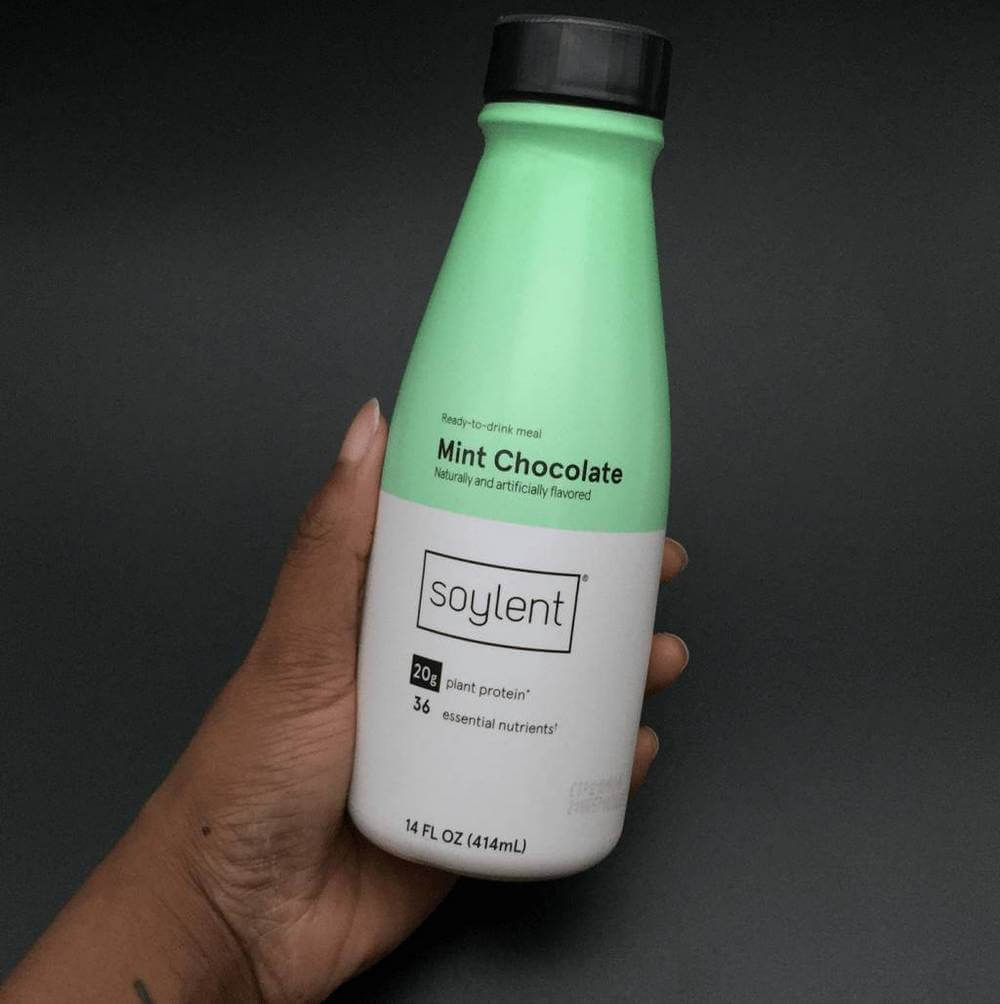 There are various reviews online.

Let’s start with some positive reviews.

It took me over a year to try this stuff after hearing about it. After trying one, I very slowly ramped it up to my current 1-2 per day. At this point, I feel as if I can confidently say that it will not hurt you. In fact, I have made huge positive leaps since then. But, at the very least, it is a phenomenal quick meal when you are already late. I only have one warning. If you chug or gulp this drink, you WILL fill a horrific pressure in your gut. I believe it is the fact that the sustenance is so finely ground that it can overload your receptors. Just sip it. Problem solved. Oh, and it is very filling. Great stuff.

Soylent! Originally made for people too busy to chew, this stuff has taken the world by storm, and it’s easy to see why – a cost-effective, mostly nutritionally complete and highly portable meal that covers 20% of your daily requirements in one bottle? Solid! This stuff is also A+ when you’re drowning in clinical depression. It’s grey (like your days), strangely palatable and entirely inoffensive, allowing you to bypass that complete loss of appetite with a few well-timed sips. No cooking required doesn’t need refrigeration and tastes just fine at room temperature. Throw a couple in your bag – sure, it’s not as good as freshly made locally-sourced food, but let’s be honest, you weren’t actually going to eat.

This made me and my husband sick. We thought it might be a fluke and tried again, but the effect was consistent more than once for both of us.

Soylent: Packages, Pricing and Where to Buy

Soylent products are available as either one-time purchases or subscriptions, and each category affects what you pay per serving.

You can purchase soylent products directly from the official website www.soylent.com or Amazon and have it delivered.

Although the manufacturer admits that delivery may take longer due to the ongoing pandemic.

Soylent allows active subscribers to edit or cancel their subscription within 5 days of the next delivery and no later than 11:59 pm pacific time.

According to Soylent’s terms, you cannot return or exchange any of their products after they have been processed and shipped unless they arrived defective or the package was damaged in transit.

Soylent Review: Should You Buy It?

Soylent is mostly healthy, safe, and nutritious unless you have an allergy to specific ingredients used.

It can help you cut down on meal preparation time and does not take much energy to store as it doesn’t require refrigeration unless you want to.

Therefore, Soylent products are worth a try, except for those who are looking for something specific to include in their weight loss regimen.