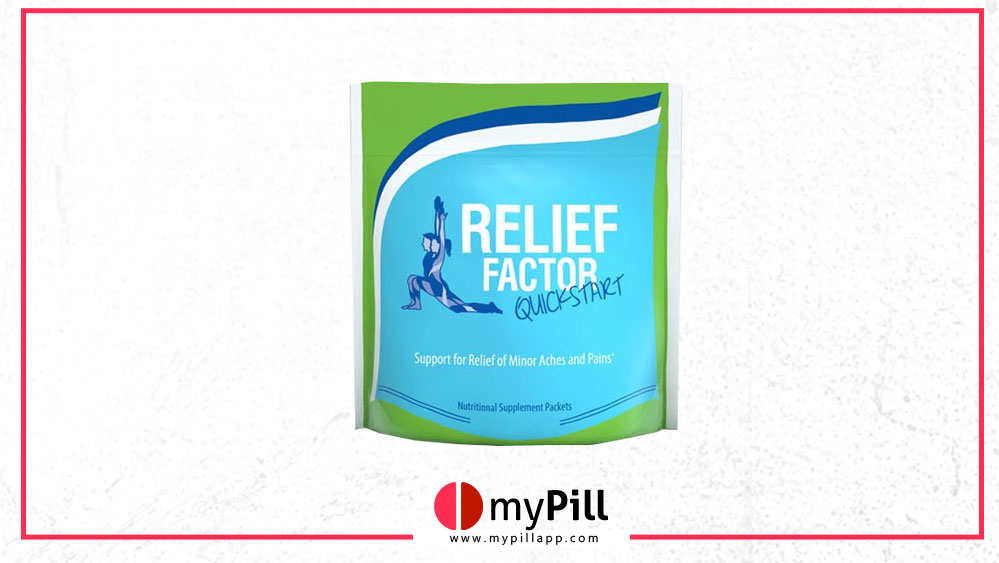 Relief Factor is a powerful combination of all botanical and fish oil ingredients which support a healthy response to fight aches and pain.

Joint inflammation is a potentially debilitating experience that can lead to severe joint and muscle pain. This is not uncommon and affects a lot of people no matter what your age.

When you’ve got it, you’re willing to do almost anything to get rid of it. It can affect your everyday living, and cause you to lose sleep at night. This of course, can have a negative impact on your life.

So you will want to eradicate the issue as quickly as possible.

As a result, there are a wide range of inflammation relief products available.

One popular natural supplement designed to overcome joint inflammation is called Relief Factor. A popular healthy joint support supplement to help with common joint issues many of can easily get.

Having received mixed feedback on this product, we wanted to get the facts for ourselves.

Our review is the result of our research on if this is right for healthy joints.

What Is Relief Factor?

Relief Factor is an all natural dietary supplement intended to bring relief from inflammation, muscle and joint pain.

The ingredients are based around botanical and fish oil ingredients and are designed to be able to eliminate inflammation, joint and muscle pain at the source. This is of course perfect for most ages to help keep your joints supple.

The official website claims that the product was developed by clinical researchers over a period of fifteen years.

The health supplement was formulated by the father and son team of Pete and Seth Talbot.

The company that created this product is called Promedev.

They are a subsidiary of Longevity Medical Clinic.

Also, it’s manufactured in the United States in factories that abide by the FDA’s good manufacturing practices.

What Are The Main Relief Factor Ingredients?

Let’s have a look what’s in Relief Factor.

It has been used in Asia for thousands of years as a powerful antioxidant and anti-inflammatory.

It also promotes the overall health of the joints, muscles and ligaments.

Studies have shown that Icariin promotes bone growth and repair. It also helps with sexual dysfunction.

Resveratrol is one of the most potent anti-oxidants to have been discovered by science.

It supports the body’s natural inflammatory response and boosts the flow of blood throughout the body.

This speeds the process of supplying oxygen and nutrients to the affected area of pain.

Omega-3 Fatty Acids are known to provide a wealth of health promoting benefits.

Included among them is the ability to support the modulation of specific gene expressions that are associated with the pain response.

This lessens pain while also fast tracking the healing process.

Curcumin is a bright yellow compound which is the active ingredient in turmeric.

It has been shown through many studies to be a powerful anti-inflammatory as well as a potent anti-oxidant.

This plant is native to China and has been a popular bodybuilding supplement ingredient due to its purported ability to boost testosterone levels naturally.

It is also an anti-inflammatory and an anti-oxidant.

Japanese Fleece Flower, also known as Japanese Knotweed, is part of the buckwheat family of herbs.

An excellent source of vitamins A and C, it is also richly provides such minerals as manganese, potassium, zinc and phosphorus.

How Does Relief Factor Work?

Relief Factor is different in that it directly targets the cause of the inflammation in order to bring permanent pain relief.

It works to restore the body’s natural ability to restore itself by fortifying it with the natural compounds that it needs to repair damaged tissue.

You will not experience overnight pain relief with Relief Factor.

Rather, the body restoring compounds in this product will build up in the body over a period of days in order to permanently bring about positive change.

This enhances blood flow to the pain affected area, bringing nourishment and oxygen to help in the repair process.

Relief Factor is supplied in the form of packets consisting of two capsules and two soft gels.

The official website recommends starting with two of these packets per day.

Then, as pain subsides, you can reduce down to just one packet per day.

It helps build up in the body, so it doesn’t matter what time of day you take it.

However, it should be taken with food in order to avoid stomach upset.

It will take about five days for levels in the body to build up enough to have a positive effect on pain.

To their credit, the manufacturers of Relief Factor have included side effects on the FAQ section of the official website.

They mention that people may experience the minor side effects of:

Less frequently, people may experience nosebleed as a result of taking Relief Factor.

The website, though, does not explain why this would be the case.

It is most likely that this is due to the actions of turmeric.

Curcumin, derived from turmeric, may be problematic for pregnant women, and may exacerbate problems for people with gallbladder and bleeding issues, as well as those who suffer from GERD and diabetes.

The capsules contains both fish oil and soy.

People who are allergic to either of these compounds should avoid taking Relief Factor.

Pregnant women and those who are planning on becoming pregnant should also refrain from the product.

Relief Factor is not really snake oil. But, of course, there’s ingredients in Relief Factor that help as an anti-inflammatory.

It’s more the question; is Relieft Factory the best anti-inflammatory.

When used with calcium, this anti-inflammantory can work wonders for your bones. Also, people take Omega-3 to help with joint-pain. However, Relief Factor has got better results in a lot of cases.

What Is The Best Anti-Inflammatory Supplement?

There are many anti-inflammantory supplements to buy online. However, you will find ones with different quality. But, Relief Factory is one supplement you can rely on to help with joint pain.

Relief Factors contains ingredients that can help with:

Relief Factor WebMD: What Is Their Review?

What does WedMD have to say about this popular supplement?

WebMD claim that turmeric has the ability to help against osteoarthritis by reducing joint pain. Also, helping to improve function.

WebMD gives positive reviews on Resveratrol. They say it may help to expand blood vessels. To get good results, reviews suggest taking dosages in the 2000-mg range.

WebMD say that the American Heart Association recommened 3000 mg of Omega-3 is the maximum you should take in a day.

With the Relief Factor you should take 3 servings everyday for a week. And, this is the equivalent of 4200-mg of fish oil per day.

The official website features a number of customer testimonials for Relief Factor.

Here is sampling of that feedback.

I have been taking Relief Factor for several years, and it works! Several of my friends also use it with great success. It is not a scam. Pat Boone actually is a customer. I would suspect that he would never endorse anything for just the money. If you know anything about him, you would understand that. I have A-Fib and am on a blood thinner and blood pressure meds. Everything works as expected except that you’ll need to tell your doctor you’re taking it to adjust the blood thinner level a bit.

If your knees hurt bad enough – which mine were – you’ll try just about anything…After four days, I thought ‘My knees aren’t hurting!’ I’ve been taking it ever since.

I heard about this from my wife…I took it every day, three times a day. I woke up, rolled over and told her ’The pain is gone!’

Relief Factor: Packages, Prices & Where To Buy It

The product can be bought on www.relieffactor.com.

When you purchase the introductory starter pack, you will be automatically signed onto the autoship program.

That means that your credit card will be billed at the rate of $79.95 + $6.95 shipping and handling every month.

The only way to stop this is to either return your starter pack within the first 15 days or to phone Promedev and cancel.

Feedback from users seems to suggest that, if you do not want to enter into the autoship program from the outset, you need to call customer service to order your 3 week starter pack.

Promedev offer a 90-day guarantee on your purchase of Relief Factor.

During that time, according to the official website, you can simply return empty bottles for a complete refund, minus $6.95 for shipping and handling

Promedev charge $6.95 on each order for shipping and handling within the continental United States.

All packages are shipped via the United States Postal Service.

At this time, this joint health product is unable to be shipped outside of the United States.

This joint health supplement is loaded with proven ingredients that have scientific backing to validate their ability to help relieve joint pain and inflammation.

These ingredients need to build up in the body before they can take effect, so will not bring immediate relief.

Be aware that purchase of the introductory pack  will sign you up for Promedev’s autoship program, with monthly billing until you take action to unsubscribe from the program.

We laid out the facts, will you buy Relief Factor? Comment below and tell us what you think!

7 Replies to Relief Factor Review: Does It Really Work?