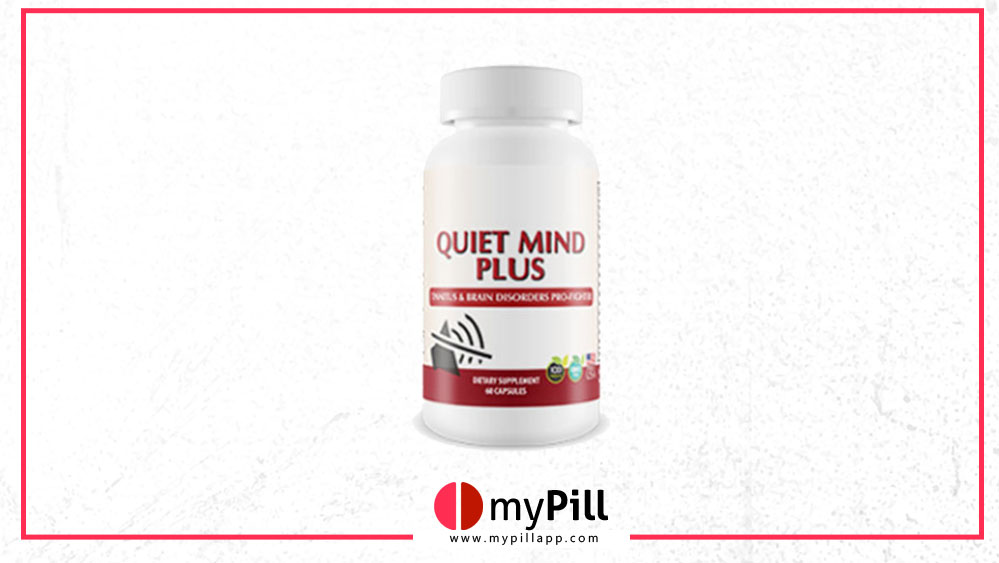 MyPill > Health > Quiet Mind Plus Review: Does It Really Work?

Quiet Mind Plus Review: Does It Really Work?

Quiet Mind Plus is an all-natural supplement that claims to help in eliminating or alleviating the symptoms of tinnitus and in the improvement of a person’s brain and overall health.

Supplements are important in helping the body and mind function properly.

But the important part is choosing the right ones.

The market is flooded with multiple dietary products that promise to help improve cognitive function.

But do they deliver their promises?

Our team sought to reveal the truth behind the Quiet Mind Plus supplement.

According to the manufacturer, Quiet Mind Plus is a brain booster that helps to relieve the mind and boosts its performance.

But, this supplement is surrounded by controversies that the formula used was stolen and recreated from one meant to cure tinnitus and the manufacturer does not match the image attached.

We sought to get the facts right; read our Quiet Mind Plus review below.

What Is Quiet Mind Plus?

Quiet Mind Plus is a nootropic that claims to improve brain performance and stop the ringing noise in the ears (tinnitus).

Tinnitus is the buzzing noise in either or both ears due to head/ear injuries, exposure to loud sounds or from medication effects.

Quiet Mind Plus claims to get rid of chronic tinnitus within 3 weeks, and eliminate brain fog, migraine, dementia and Alzheimer’s disease.

It was manufactured by Gregory Peters, a California based medical librarian, who claims that he suffered tinnitus for a long time until he contacted Dr. Steven Campbell, who works as part of an ultra-secret team at a famous IQ organization.

Campbell introduced Peters to an ultra-secret protocol that was only known to secret IQ organization members and government officials.

This ‘secret’ apparently had healed Campbell from the condition before.

Gregory Peters claims that Campbell helped him ‘steal’ the ultra-secret from the IQ organizations and create an ultra-secret anti-tinnitus formula which is the supposed Quiet Mind Plus.

Well, what a story to this supplement!

The product does not have any supplements facts.

But here are some few ingredients stated in their video.

Vitamin C is a powerful antioxidant that helps to boosts the body’s immunity system.

Vitamin B6 is essential for both brain development and better brain function.

It boosts the production of serotonin and norepinephrine, hormones that improve mood and help cope with stress.

Vitamin B12 boosts healthy cells and supports the production of DNA in the body.

It is also known to shield the brain against Alzheimer’s disease and Parkinson’s.

Buchu leaves are used to lessen inflammation and protect the kidney and urinary tract from infections.

It is both antiseptic and diuretic.

Garlic increases stress endurance in the brain and reduces inflammation caused by aging and neurological diseases.

Uva Ursi detoxifies the body from toxins including free radicals.

It also reduces inflammation in the body.

Hibiscus is rich in antioxidants that help fight off bacteria.

It helps in relieving stress.

How Does Quiet Mind Plus Work

It is claimed that the natural ingredients work together to get rid of toxins that may cause tinnitus.

In the process of eliminating the harmful toxins, they boost brain cells improving memory and preventing memory disorders like Alzheimer’s disease.

It calms a person down and works to regenerate brain cells; correcting damage cells and producing new cells.

The recommended dose is 2 pills twice a day for 60 days.

The manufacturer advises that the product should be used religiously for two months to achieve desired results.

However, he says results could start showing as early as 3 weeks.

Quiet Mind Plus Side Effects

However, without a supplement fact sheet, we cannot tell if the dosage of some ingredients might be harmful.

For instance, buchu leaves may result in stomach upsets, hawthorn may lead to headaches and fatigue while garlic is likely to cause body odor.

Donita Cooper reported that her husband got sick.

I bought for my husband !!! He only took one pill and it made him sick. I have tried to get a phone number but haven’t been able too!!!

Consult a doctor before using any supplement.

Is Quiet Mind Plus A Scam?

Quiet Mind Plus may not be but it is surrounded by various negative claims that we cannot overlook.

Here is the most controversial thing: the photo of Gregory Peters used is a stock photo that can easily be bought from shutterstock.com and depositphotos.com among others and does not belong to a medical librarian.

Their official website is not helpful either; it provides a long video that basically talks about the tinnitus and nothing concrete on the formula of the product.

Again, their products are not sold anywhere else, apart from their site, which seems not to be working anymore.

The lack of evidence and substantial facts but just a mere video on their site is quite a big concern.

There seem to be very scattered reviews on the product apart from the website, where it has massive testimonials.

It has received 7 customer reviews on dietsinreview.com, with a 33% user rating.

The overall rating is 1.5 stars out of 5 stars.

Unfortunately, it did not have any positive reviews out here.

Here’s is what some had to say.

Kelvin Kraft wrote this on dietsinreview.com:

SCAM! They tell customers this may take several months but, they don’t tell you the refund expires 60 days into use. Doesn’t work! SCAM!

I fell for the bogus video for Quiet Mind Plus and ordered 6 bottles. After 30 days of taking the product as directed, I saw no effect whatsoever. Luckily, I contacted them and successfully received a refund after returning the remaining 5 bottles…

Some users were really disappointed.

Here is what Annette Nelson wrote on contrahealthscam.com.

Sure wish I had read this before forking over the $234 for nothing! Of course, I tried to return the product and it was after the magic date.

Others like Tom Jackson were concerned about the fake testimonials on their site.

Here is what he had to say on askmaryrd.com.

Totally worthless item, it is insane how many fake testimonials are present for this fake product. Not recommended. I have used it for more than ten weeks, it improved nothing, but seriously, it increased my frustration.

Quiet Mind Plus: Packages, Prices & Where To Buy It

A single bottle contains 30 capsules of Quiet Mind Plus.

It is only available in the following countries: Australia, United States, United Kingdom, Canada, and New Zealand.

The company offers a 60-day money back guarantee and 100% refund policy.

However, we were concerned about the many complaints regarding this money back guarantee.

Many users seemed to complain that the company does not honor it.

This was affirmed by Sheila D Tucker who wrote on contrahealthscam.com:

I bought the 3 bottles for 177.00. They give you 60 days to try the product. I took 1 bottle and it did nothing to relieve the ringing in my ears. So I sent back the other 2 unopened bottles and the empty bottles for a refund. I have called and called and they keep saying that they would check on my return. That has been 3 months ago and still no refund. So I am out 177.00.

Others complained of ignored calls and auto charges even when they did not want the product and needed the refund.

We are yet to confirm these claims through the company.

There is no backed up evidence on the claims laid out.

Having only positive testimonials on the website possess a risk.

The company has two listings on the Better Business Bureau; the previous location has numerous complaints on the company.

The video has failed to state any clinical findings attributed to the product.

Additionally, it is really hard to tell what the specific dosage for each supplement without the fact sheet.

The lack of third party opinions on the product raises more concerns.

However, you may take the 60-day refund policy product to see if it delivers its claims.

We laid out the facts, will you buy Quiet Mind Plus? Comment below and tell us what you think!