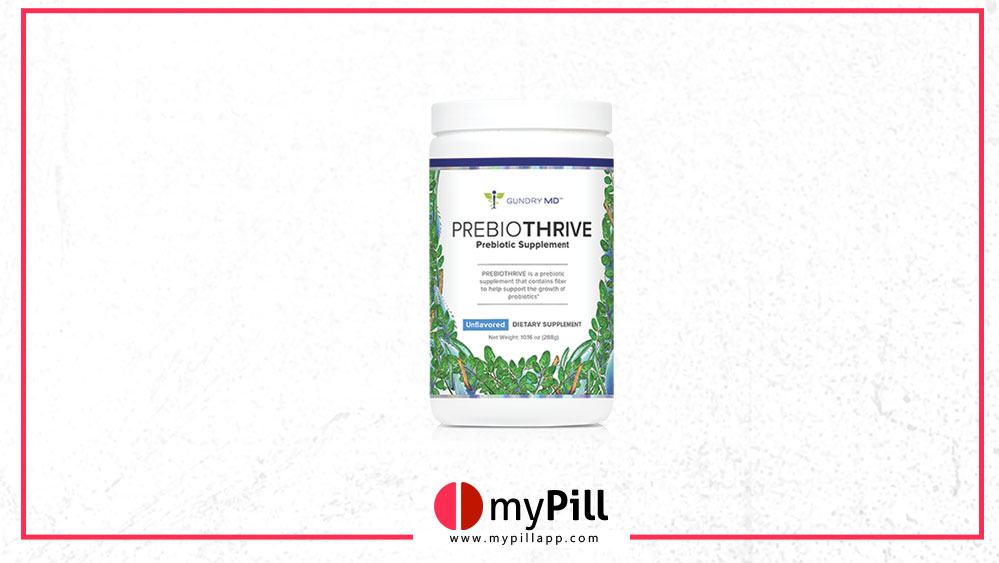 PrebioThrive Review: Does It Really Work?

The science around prebiotics and probiotics aren’t exactly new, but the supplements that help promote either or both differ in quality and value.

Truth be told, it’s difficult to determine which supplements are helping you from those that are just cashing in.

Could PrebioThrive be a wonder supplement or another marketing ploy?

Read our PrebioThrive review to find out!

PrebioThrive is hails from Gundry MD, a company founded by its namesake with the aim to significantly improve human health, happiness, and longevity. Or basically what every other CEO of a health supplement company says.

PrebioThrive itself is described as a cutting-edge formula, but we’ll be the judge of that.

Most of the ingredients are organic which means it’s good enough for people who don’t cater to GMOs and “Big Food” or for those who just like the idea of buying organic supplements.

Used in a variety of products which range from supplements to lozenges and ice cream. Research has shown it to be better at increasing bifidobacteria and lactobacili than the same amount of inulin. It also seems to be not as bad on the side effects compared to other prebiotics too. Being the first on the list means this is the dominant ingredient.

Inulin has been known to be a full-fledged source of dietary fiber for a long time now, but research has shown its potential as a good prebiotic mainly increasing fecal Actinobacteria and Bifidobacterium. It’s not as good as acacia gum, though.

Not exactly a prebiotic, but an ingredient that supports prebiotic ingredients.

Research shows this ingredient to be capable of enhancing growth of Lactobacillus and Bifidobacterium strains. It has to be high-purity, though, and we assume it’s not.

Studies say it’s capable of reducing symptoms of irritable bowel syndrome such as bloating. It has to be at around 6 g/day, though, and being in the bottom of the rung means it’s more of an accessory than a functional ingredient.

How Does PrebioThrive Work

From the get-go, PrebioThrive’s ingredients look promising. It does have research-backed ingredients that can help support prebiotic efforts.

The only problem we see is we don’t know the dosing for each ingredient, and when it comes to research-backed ingredients dosing is everything.

They started pretty good with Acacia gum and Agave inulin, although it would’ve been better (and much more efficient) if they omitted the latter and just pumped up Acacia gum.

The study says Acacia gum performs at a much better rate than Agave inulin anyway, so why not just distribute the dose to what gives you the best bang for your buck?

We like the addition of flaxseed here especially if it’s in oil form. It doesn’t hurt to have an ingredient capable of augmenting other ingredients.

We also have no real complaints against their Galacto-oligosaccharides save for its purity or lack thereof, as the studies indicate high purity works best when it comes to prebiotic applications.

We would’ve omitted guar gum altogether and added the dose to acacia gum if only because the working dose for guar gum is clearly not provided in this formulation.

All in all, we think PrebioThrive has potential, but you’re gonna have to take more than 1 scoop to get the right benefits your body needs.

Even if 10 g sounds a lot, it would help to know that prebiotics work within that range as a minimum, with the smallest possible doses at around 6 g which are usually reserved for really high-potency ingredients.

There is definitely prebiotic potential in this supplement, and they do have the right ingredients despite poor formula design, but the questions are:

Guess you’ll just have to find out yourself.

As with most prebiotics, gas and bloating are expected particularly during the first few days.

Good thing most of the ingredients here are reported to not have severe side effects if they do have them.

Customer feedback say they experience gas and stomach cramps, not to mention they say it doesn’t dissolve easily in water and tastes horrible.

It’s not a scam in a sense that it has ingredients that tell us it’s a prebiotic supplement.

Whether it works or not is subjective to the user’s body.

There’s a good mix of good and bad reviews, with bad reviews winning. Here are some of them:

As instructed, I add one level scoop to water and drink it in the morning, first thing before eating anything. If it has a flavor, it is mild. My waistline is slimmer and I no longer have tummy bloating or swollen ankles and fingers. Yes, I did experience gas at the beginning, but it went away.

I noticed a difference within a few days of taking this, and cutting out Splenda, and using Stevia in my coffee. Sugar cravings are way down, so binging on bad foods is, too. I would have rated 5 stars, but the canister is small for the price, and filled half-way, at that. I will still buy it, for my health, but a full cannister would be a bettet cost value.

I purchased this product through their website. The product does work, so I can’t be overly critical. However, for me it has made me extremely gassy. I now have long loud and smelly trumpeting going on back there. I have been using the product for over a month with the hopes that the backdoor renditions would begin to subside. Nope. In fact the trumpeting has increased like it is practicing for a new gig.

I wish I’d read the negative reviews before I ordered $199, worth of this product. Dr. G’s online talk is so persuasive that I fell for it. I’m an MD myself and it made sense to me. The product doesn’t dissolve but creates an unpalatable suspension that can make you retch and gag. I was determined to push through the negativity and tried for two weeks, after which time I realized that the terrible cramps I was experiencing began right after beginning with the PreBioThrive. I stopped and two days later I am back to normal.

PrebioThrive: Packages, Prices & Where To Buy It

We recommend to buy this product at official website: gundrymd.com.

Our PrebioThrive review fully explained both the pros and cons of this supplement.

We like the ingredients, the synergy, and the convenient savings per order the company advertises.

What we didn’t like are the numerous complaints and the positive reviews that looked to come from paid review writers.

There’s a good chance it will work, but the odds of it not working at all is just about the same too.

We laid out the facts, will you buy PrebioThrive? Comment below and tell us what you think!

11 Replies to PrebioThrive Review: Does It Really Work?