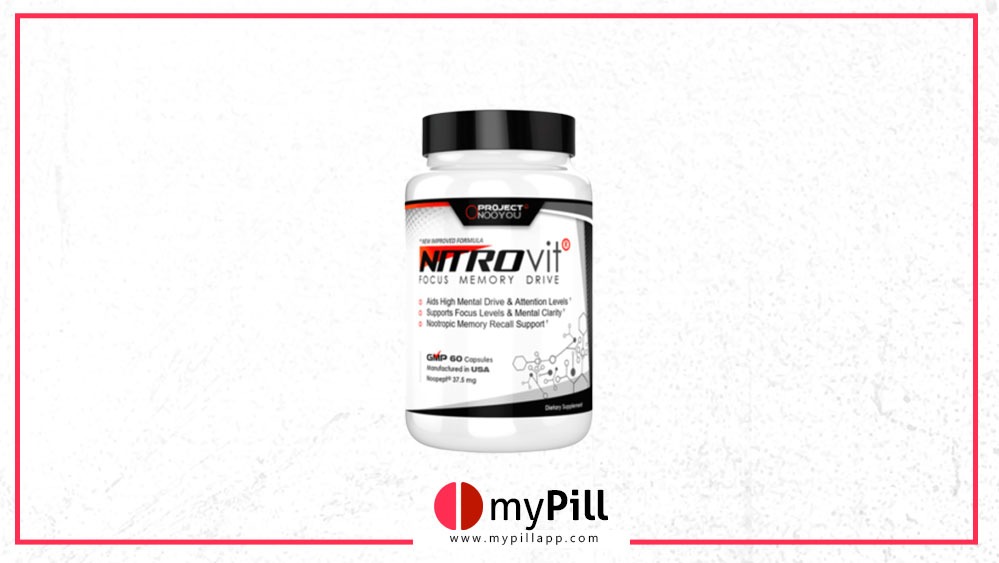 Is your cognition letting you down every day? Try Nitrovit to enhance your brain power and improve focus. Learn more about it in this review.

Do you often struggle to remain focused while working or studying?

Do you wake up with a foggy head each morning?

However, the market is flooded with various brain boosters, some of which are mere hype.

But, there exist genuine products as Nitrovit.

Nitrovit is one of the best nootropics 1 in the market.

It focuses on improving attention issues such as symptoms of ADHD, enhance memory, and reduce anxiety.

We dug deeper into this brain booster, and here is the detailed Nitrovit review.

It contains various ingredients that have been proven to improve brain performance.

It is manufactured by Neuro Laboratories, based in New York, USA.

It was formulated by Archie Marks, the company’s CEO, who was suffering from significant attention issues, poor memory, and anxiety.

Here is detailed information on each.

GABA
GABA is a neurotransmitter known to slow cognitive function. Thus, it improves sleep, relieves anxiety, lower stress, and protects the brain from damage. Research 2 done by the department of medicine at UCLA shows that GABA enhances the receptor functions. The GABA receptors, when activated, decrease calcium ions and create a media whereby postsynaptic and presynaptic is inhibited. Presynaptic works by reducing the influx of calcium ions, which in turn leads to a decrease in the release of the neurotransmitters. So, with the adequate levels of GABA in your brain, the impulse between the nerve cells in the brain will function correctly.
Phosphatidylserine
Phosphatidylserine is a phospholipid that boosts the release of neurotransmitters, enhances brain growth, and prevents memory loss. A study 3 done by Progressive laboratories Inc. shows that Phosphatidylserine plays a significant role in boosting brain performance including increasing memory and reducing age-related mental decline. However, in high doses, it may cause nausea, headache, and insomnia.
Vitamin D-3
Vitamin D3 promotes brain injury healing and reduces symptoms of mental disorders, and schizophrenia. It mainly comes from sunlight and plays a significant role in calcium metabolism and bone density. Besides,its deficiency may lead to brain-related diseases like dementia and autism. Studies support that D3 may help reduces depressive symptoms by maintaining calcium ions balance.
Alpha-Lipoic acid
Alpha-Lipoic acid increases memory and supports healthy nerves both in the brain and the entire body. Also, it an antioxidant that prevents free radical damage, hence, protecting the brain from age-related cognitive decline.
Caffeine
Caffeine is one of the popular psychoactive products known to increase brain performance. It is found everywhere from sodas, wild berries, coffee, and chocolate bars. Caffeine is a natural substance that is popularly known as adenosine once it reaches the brain. Research 4 shows that caffeine plays a significant role in preventing neurodegenerative diseases like Alzheimer's or dementia. However, excessive consumption of caffeine leads to problems like insomnia, muscle break down, and digestive problems.
Huperzine A
Huperzine A increases brain performance by inhibiting the breakdown of acetylcholinesterase, an enzyme that destroys acetylcholine in the brain. Optimal levels of acetylcholine mean improved cognitive function. It is significant in improving brain function especially in individuals with Alzheimer’s disease.
Tyrosine
Tyrosine promotes mental performance by synthesizing neurotransmitters that help in increasing memory and fast processing of information. Studies show that it is an efficient product in reducing stress and boosting mood.
Taurine
Taurine is an amino acid that plays a significant role in your brain. It protects brain cells, boosts memory, and activates GABA. Research 5 shows that Taurine and GABA bind together to maintain and stabilize your central nervous system.
Vitamin B-12
Vitamin B12 works best by improving brain function and maintaining the proper function of the nervous system. Low administration of B12 is linked to brain shrinkage, especially among the elderly. However, with Optimind, you get the required amount of B12 to help boost your brain performance.
Sulbutiamine
Sulbutiamine is popularly known as an upgraded version of vitamin B1. It differs with it in that it can dissolve in fats. It is known to reduce both physical and mental fatigue. Besides, it helps to treat Alzheimer’s disease and improve memory capacity. Studies show that it boosts mood, enhances energy and stamina, lowers anxiety, increases memory, and improves motivation.
Bacopa Monnieri
Bacopa Monnier is a popular natural memory enhancer. Also, it increases focus, lowers stress levels, and works in line with GABA for increased production of serotonin. Bacopa also helps in reducing brain damage from free radical cells.
Vinpocetine
Vinpocetine enhances blood flow to the brain, thus improving cognitive function such as memory, focus, information processing, learning and nerve growth. Also, it prevents Alzheimer’s disease and other attention and memory disorders.

Nitrovit is a nootropic that claims to improve working memory, boost focus, and enhance motivation and productivity.

The manufacturer claims that Nitrovit does so by providing a choline-rich formula that provides brain nutrients that enhance general cognition.

Each bottle of Nitrovit contains 60 capsules.

But, four capsules should not be exceeded within 24 hours.

The manufacturer recommends cycling Nitrovit, 5 days on and 2 days off to prevent tolerance buildup.

This is because it contains Huperzine A and Noopept, which may cause side effects when taken continuously for a long time.

Take enough water to hydrate the body because this nootropic contains caffeine (Guarana).

Nitrovit is not recommended for individuals under 18 years and pregnant and breastfeeding women.

Are There Any Nitrovit Side Effects?

There are no reported side effects associated with Nitrovit.

However, in-depth research into the ingredients shows that there is a possibility of potential side effects.

For instance, it contains caffeine-guarana, which might cause side effects in individuals who are sensitive to caffeine , including jitteriness, insomnia, and restlessness.

Moreover, Alpha GPC is known to cause a skin rash, headache, heartburn, dizziness, and insomnia.

All the same, the manufacturer advises that you should hydrate enough and cycle the supplement to avoid adverse side effects.

Additionally, consult your physician if you have a pre-existing medical condition.

Nitrovit Reviews: What People Say About This Product? 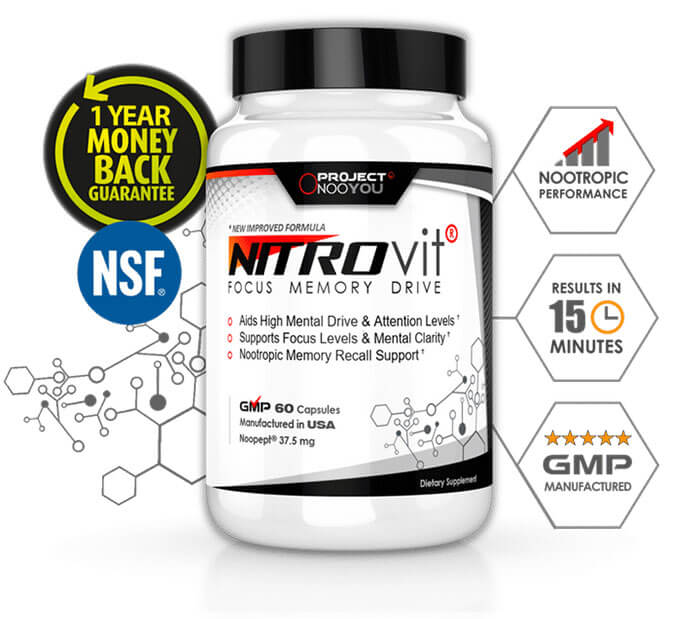 Nitrovit claims to be the future of brain health.

It has gained popularity among most individuals, and we sought to find out what users had to say.

Here are some customer reviews:

“I’ve been using Nitrovit for close to 5 months now and find myself in a very different position to where I was back then. Nitrovit has helped my focus issues and has had a profound effect on my mood. They have changed the formula in the time I have been taking it, but both formulas have been similar in terms of ingredients, so no real difference except they got rid of Noopept, which I felt was a shame due to the deserved hype surrounding it. The current formula is great, however, for myself, and while I have only tried one other product (Provasil), Nitrovit has been the one that has come closest to the mark in terms of results versus claims.”

“Day 2 on Nitrovit. I ABSOLUTELY LOVE IT. I cut the dose of my SSRI by half and stopped taking the stimulant I was on for ADHD. I have already felt a significant difference in focus, concentration, energy, and motivation. I have definitely been more productive. I’m still trying to get my health insurance situation figured out, but I’m making plans to try TMS therapy. I’m still considering hypnosis as well. I will continue to keep you posted on my progress. But so far, so good! THANK YOU!”

“I decided to order and am pleased to say it has given me the clean focus and energy that I’ve been craving this whole time. When I attempt a task after taking Nitrovit, I become fully engaged with it to a very high standard. The best part is it seems so effortless. Needless to say, I’ve been much more productive at work. I have ordered several more bottles since my initial purchase. It is by far the best stack that I’ve personally tried.”

Nitrovit: Packages, Pricing and Where to Buy

Payments are fulfilled through PayPal and various credit/debit cards.

It comes with free shipping on orders above $99.

They state their refund policy is ‘no questions asked, ‘but they appreciate feedback as to why you are returning the product for future improvements.

You are required to email [email protected] to request a refund.

Nitrovit Review: Should You Buy It? 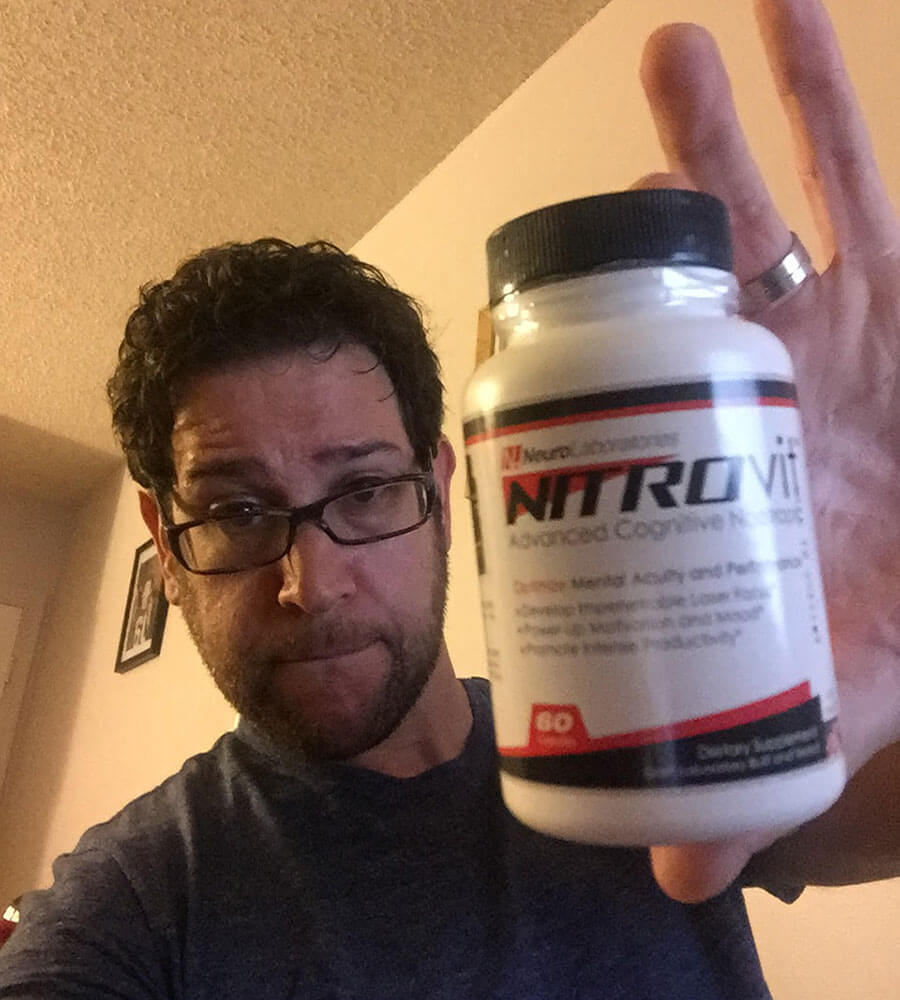 Nitrovit is an effective cognitive enhancing product that combines both natural and synthetic elements that have been proven to improve cognitive abilities.

There are no reported side effects, but there is the risk of side effects if you do not cycle, take enough water, and follow the right dosage.

Always consult your doctor before taking any supplements.

Read next: Qualia Mind Review 2023: Should You Buy It?