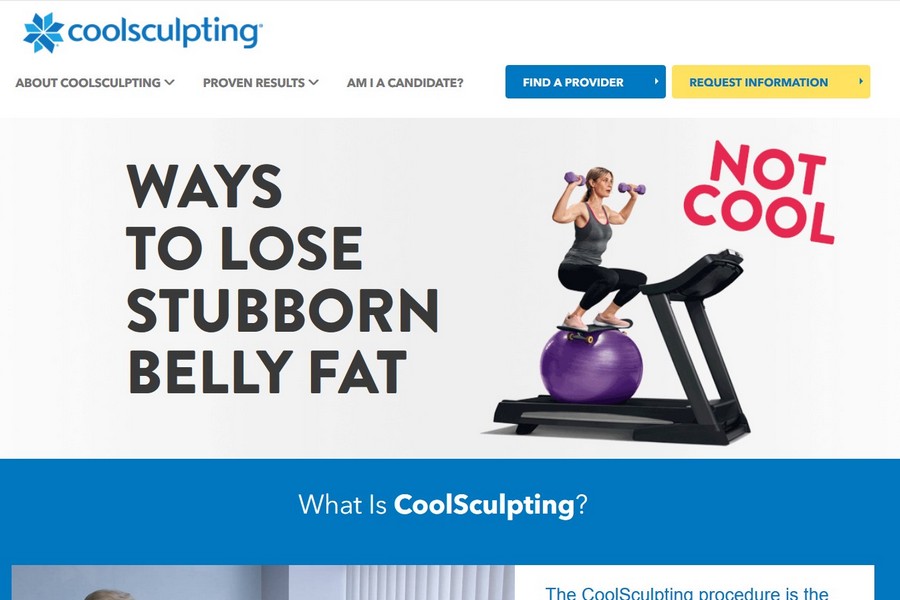 CoolSculpting’s cryolipolysis technology offers permanent, non-surgical fat loss for the belly, love handles, or thighs by freezing fat cells and removing them. Read our review to find out more about this procedure.

We are in the era of science and technology where everything is almost possible to achieve.

The same applies to the cosmetic industry where individuals can achieve any look through procedures requiring less effort.

You have probably heard about fat freezing or CoolSculpting.

The idea of freezing your fat sounds scary but at the end of this review, it will be all clear.

CoolSculpting is a trademark name for a non-invasive procedure referred to as cryolipolysis1 that freezes fat cells in the thighs, back folds, neck, belly, under the buttocks, under the chin and love handles and eliminates them.

So how easy and comfortable is this procedure?

We sought to get the facts right in our CoolSculpting reviews below.

CoolSculpting is a non-surgical body contouring procedure that targets stubborn fat, freezes and gets rid of it.

It was FDA approved in 2010 as a fat removal procedure.

This procedure employs freezing temperatures to break down fat cells while preserving the surrounding body tissues.

Normally, cold temperatures do not damage underlying tissue they way they do fat cells.

Their development was founded on children eating popsicles.

They noticed that children who frequently took popsicles were likely to develop dimples.

This is because; the frequent exposure to cold had removed all fat cells in their cheeks.

There is scientific evidence supporting cryolipolysis to be a safe fat reduction method.

A 2015 review that evaluated 19 previous studies on cryolipolysis reported that individuals had 25.5%-28.5% fat reduction following the treatment.

Studies also showed that the procedure had no serious side effects on the user.

This procedure suits healthy individuals who are within 20 pounds of their ideal weight and want to remove unwanted fat from small areas.

Most doctors say that an individual can lose about 20%-30% of unwanted fat following one treatment session.

How Does Coolsculpting Work

A CoolSculpting procedure involves marking the areas of concern and placing gel on the area.

The physician then clamps the area with the CoolSculpting applicator which provides cooling to the targeted fat.

This process generally lasts an hour where it freezes the subcutaneous fat cells without affecting the surrounding skin cells.

As a result, there is an inflammatory response which leads to fat cells death.

It is a painless procedure, which allows you to do other things as it takes place like watching a movie, napping or working on your laptop.

After treatment, you may notice redness and some swelling in the area but it should go away within a short while.

Your physician may ask you to have multiple treatments depending on the amount of fat.

This procedure crystallizes fat cells and destroys them and eventually flushed out of the body with time.

How Long Does It Take To See Results?

After treatment, the body takes a few weeks to start flushing out the destroyed fat cells.

It can take as early as 3 weeks to see results.

However, distinct results are realized between 30 and 90 days following treatment.

Are These Results Permanent?

This procedure destroys fat cells and removes them from the body; adults do not produce new fat cells.

However, this technology works better if you control your weight.

A permanent solution can happen if you manage your nutritional and exercise behavior as well.

You may go through the procedure but if you do not watch your diet, then you may continue expanding your existing fat cells.

Who Should Avoid Coolsculpting?

CoolSculpting is a safe procedure however, it may not be ideal for some individuals.

First, Individuals who want to lose weight should not try CoolSculpting.

This procedure only reduces small fat bulges and does not get rid of most fat. It does not treat obesity.

Secondly, individuals with a weakened immune system are advised not to go through fat freezing.

Finally, the following conditions rule out the use of the procedure:

The procedure could lead to serious problems among those with the above conditions.

Most individuals resume their daily routines immediately because it does not involve any recovery time.

However, there are some minor side effects that only appear at the area of treatment including

These effects may take a few weeks or months to go away.

Note: Paradoxical adipose hyperplasia7 does not go away alone and requires surgery.

On HighYa, it has 51 customer reviews with 10% reporting that they would recommend it.

What did customers have to say?

Some users reported that the procedure was not working and it could be a scam.

This is backed up by Lee W.

She wrote this on HighYa:

Not sure if it has changed but I had this very procedure done two years ago. I weigh 120 but had a couple of problem areas in my inner thighs and waist. It seemed to work almost immediately until about a week later when everything went back to looking exactly like it did before. I personally think it is a scam, sorry!

I thought I was a good candidate since I’m active and overall thin with just the stubborn fat around my midsection. I went to two places for consultations/pricing and chose one. I put this procedure on my credit card since it was more than I could afford at the time. I thought it would be worth it in the end, but too MUCH disappointment – a total waste of money! I wish I could have that money back and just spend a bit more time in the gym.

Here are some positive reviews.

Jennifer states that she saw results, although it was gradual.

Here is what she wrote on HighYa:

In my opinion, it was a pain-free and stress-free experience. No downtime from work. It was true that results are gradual and become noticeable after a couple of months, but after three months, HUGE change. I had flanks and back done, my pants size is smaller and I lost the bra back fat. I have my confidence back to wear form-fitting shirts!

Chbushbu had this to say on RealSelf:

I look like I’ve lost 15 lbs.! The rolls around my waist are totally gone. So happy! And it’s not painful. Plus there’s no downtime. You can do it on a lunch break and go back to work. Try it, you’ll be SO glad!

Coolsculpting Before And After Photos (Taken From Google)

How Much Does Coolsculpting Cost?

The price can vary because it is offered by different doctors and cosmetic clinics that have different rates.

We found out that prices depend on the expertise of the provider, location, and size of the applicator.

Additionally, the number of treatments to undertake may affect the overall cost, especially since some areas may require more than one treatment.

However, some cosmetic centers offer discounts up to 25% if an individual requires several treatments.

CoolSculpting is surrounded by positive customer reviews and a good amount of scientific evidence.

Thus, it may be an ideal solution for your fat bulges.

However, it is not a solution to obesity or an underlying cause of unwanted fat.

More research is needed to ascertain its long-term safety and effectiveness.

We laid out the facts, will you try CoolSculpting? Comment below and tell us what you think!