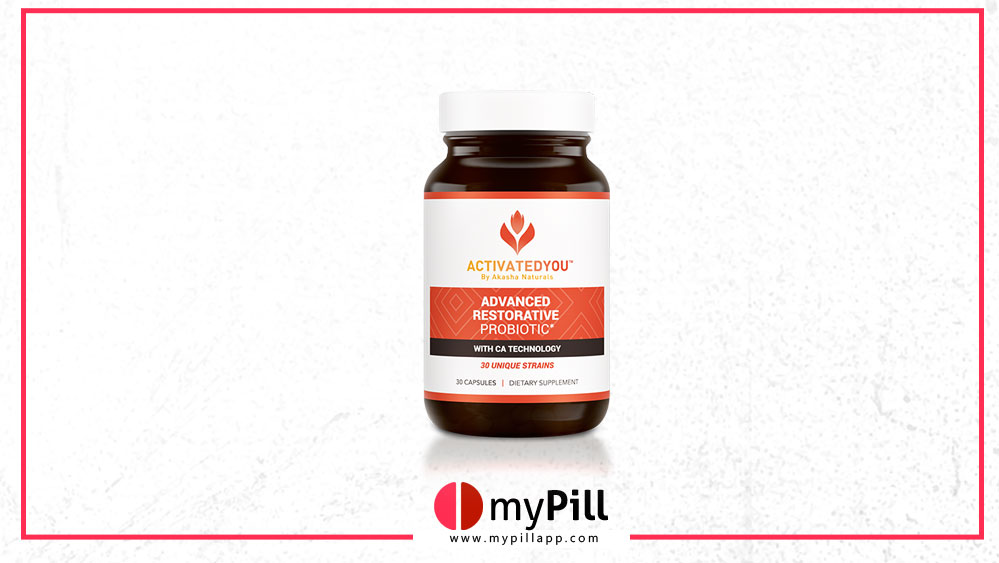 Advanced Restorative Probiotic is a digestive product that is designed to prime the digestive system with the help of 30 strain probiotics.

Beauty might be seen on the outside but it definitely starts on the inside.

Feeling good on the inside can make all the difference.

Feeling tired and drained of energy can take a toll on one’s confidence.

Taking care of your mind and body is important.

And balance is key to living a healthy life.

Taking a probiotic supplement can sometimes do all the difference.

What is Advanced Restorative Probiotic?

Advanced Restorative Probiotic is designed to prime the digestive system with the help of 30 strain probiotics.

This supplement claims to improve your mood and energy levels by balancing the body.

ActivatedYou also use recyclable and reused materials whenever possible.

ActivatedYou has several other supplements to help with specific needs.

You will find this bacteria in the intestines, and it plays a huge role in our health.

It produces lactic acid by breaking down lactose, sugar found in milk.

This is a bacteria usually found on the skin, this bacteria is often used in B12, probiotics and cheese.

This bacteria is often referred to as gut flora, it helps to keep the stomach at balance.

This bacteria is also found in the intestines, and it is a big part of the gut flora in mammals.

This bacteria has tons of health benefits, and it is proven to not only increase vitamin D but it also lowers the cholesterol.

Though it is not good for people who have histamine intolerance!

This is a bacteria usually found in yeast, sourdough and the mouth.

This bacteria is less studied, but shows a great amount of health benefits boosting the immune system.

This bacteria supports a healthy gut.

It helps to improve the lining of the intestines, thus helps you feel better, less gassy and bloated after a meal.

This bacteria is also found in oral cavity and the gastrointestinal tract.

This bacteria is important to help maintain a healthy weight. Researchers have found that it helps speed up the metabolism and thus promotes weight loss.

It also boosts the immunity and can prevent infections.

This bacteria can be found in the stomach of most mammals, including humans.

This white powder is used in tablets, it opposes no risks, but can cause a bit of laxative effect if taken in high amounts.

It is also used as a stabilizer, anti-caking agent and as a texture modifier.

This is a salt made up of two ingredients.

Magnesium and stearic acid, which is saturated fat.

This ingredient is usually used in capsules.

It keeps the ingredients from sticking to each other and the machines which makes the capsules.

How Does Advanced Restorative Probiotic Work?

Advanced Restorative Probiotic supplement is full of healthy bacteria that will bring balance to the body.

It provides the body with the extra strength to pick up all the nutrients from food.

It also improves your mood and energy levels and makes the skin more radiant.

The supplement is full of healthy gut bacteria.

This will help ease the discomfort many people experience after a good meal.

ActivatedYou recommends taking one capsule a day with a meal.

There is no mention of side effects on the ActivatedYou website.

They do claim the product is safe.

But like other probiotics, there is the chance of side effects.

You might experience minor discomfort while the body gets used to the supplement.

Unfortunately this product is rather new and doesn’t have that many reviews.

Of course all the reviews on their website is 4.5 or more stars, so it makes it hard to judge.

The product or company might not be a scam, but the advertisement makes it sound as if everyone should use it.

This is far from right.

Some people need probiotics to balance their gut, others may only need to change a few things in their diet.

You can find most of the important ingredients in your diet.

So in some cases, a simple diet change can do all the difference.

Being that this product is new, it makes it hard to find a lot of reviews for it, also it is not available on Amazon.

But a website that does talk about this product is Highya.com.

Here you can find 201 reviews done by verified reviewers.

Which is a pretty good rating.

I am new to this product, however, I did notice a change right away in terms of my energy level and less bloatedness in my stomach. I like the fact that it is only one pill once a day. I actually stopped taking multivitamins and I’m just trying this product. I am hoping to continue to feel and see the same results consistently.

The probiotic has greatly reduced painful stomach discomfort and bloat in just the first three months. I cannot wait to see continued results! I have also used the digestive enzymes. My issue with these is remembering to take them with every meal throughout the day when I’m on the go.

Meanwhile most of the negative reviews all seem to have one thing in common.

And of course, to get to the “special online pricing,” I had to first listen to a ridiculous infomercial, just as I had to on television for the Magic Tracks. I very nearly abandoned the order process because it started to feel like a huge scam. If you place your order online, be prepared for some heavy duty up-selling attempts.

Several other people mention how they are led or tricked into buying more by being promised the price will go down.

Other’s complain about the side effects being too severe and then not being able to return it:

I took it for three days and had severe stomach pains and diarrhea. The invoice said it’s returnable and to contact them. I received a response about probiotics and die off, and I should try it for two weeks and if symptoms don’t get better, stop usage.

First, I’ve been on several probiotics and not had this issue. Second, I feel like they are avoiding my request to return. So we will see how they respond to my question – “Are you saying I can’t return it even though the invoice says I can?

Advanced Restorative Probiotic: Packages, Prices & Where To Buy It

Advanced Restorative Probiotic is available from the ActivatedYou website: www.activatedyou.com

There are three packages available.

All packages are with free shipping and handling.

ActivatedYou has a 90-day money back guarantee, used or unused.

This product seems like it will work great for the person who actually needs it.

The only thing to look out for is the ordering process, make sure you don’t add any extra’s to your cart.

Unless you want them.

Like any other product it seems to have its good and bad.

Overall it seems to be a good product that has indeed helped a lot of people.

We laid out the facts, will you buy Advanced Restorative Probiotic? Comment below and tell us what you think!

8 Replies to Advanced Restorative Probiotic Review: Does It Really Work?